I guess I’ve been having feelings that I didn’t want to share under my Ramadan blogs so I didn’t. Here’s a summary of what I’ve been up to instead.

This weekend I travelled to join some friends and strangers at an annual Iftar gathering. The atmosphere and the generosity of the family hosting was nothing short of beautiful. It was lovely catching up with like minded friends I had not seen in several months. And the food was banging! Inshallah if I have the capacity I hope I can host annual Iftar gatherings for friends and neighbours when I am living in my own house. Food really does bring people together and during Ramadan it is just like magic.

Some of my friends were driving back after fota (sehri/suhoor) and had a spare seat. I had a train booked for the next day but that would have meant I did not get home until 4 – less time to see mum. We stopped by at a local mosque to pray and I was pleasantly surprised to find not only did they have a women’s section (and a large one at that) but it was open for women for fajr. Even one of my local mosques which is one of the biggest in the country closes their women’s centre during fajr.

The drive back took several hours and was full of laughter and sharing stories. The sun was shining and the scenery was breath taking. At one point we did make a small stop to take it all in only to be attacked by little bugs. I did manage to capture this view though. 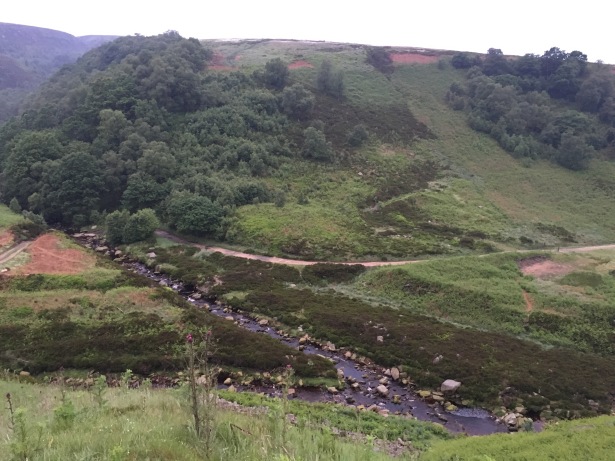 By the time we got home it was just after 9 and I was shattered. I thought I would take a little nap and then wake up with everyone else. You see my mum was a little annoyed I had decided to go away for Iftar since I am working away anyway and we had a dawat (gathering) on Saturday. I know she could have used the help and I’m sure it wasn’t fun for her to explain I had decided to go out with friends to her friends and family. I was planning to make it up to her but next thing you know it was 5PM. Naturally she was annoyed I had wasted the whole day and was throwing me ample shade throughout the rest of the evening.

All is well now though. And I will remember to buy flowers of Friday inshallah just to quell any remaining remnants of anger.

I’m currently sitting in first class on my way up to the north. I hate sitting here and feel very conscious of my presence. As I walk in I know people are surprised I am even here. The man sitting next to me actually asked “this is your seat is it?” when I asked him if he could move his coat off of my seat. The man infront of me is taking up a significant portion of my leg room. I’m a small person so usually I’m ok to let people have a little more room. But he keeps moving his feet onto my mine every few minutes to the point I’m currently sitting crosslegged with one of my legs on the other side. The whole idea of “class” carriages annoy me. It’s not exactly about class anymore. I assume many of the people sitting here will be getting their tickets reimbursed. So it’s a better service – just call it that without gripping onto the horrible class segregation histories associated with the two carriages.

Damn I sound grumpy. Maybe it’s the lack of sleep.

Wishing everyone the best today – it’s the longest day of the year here so it only gets easier from here on out!